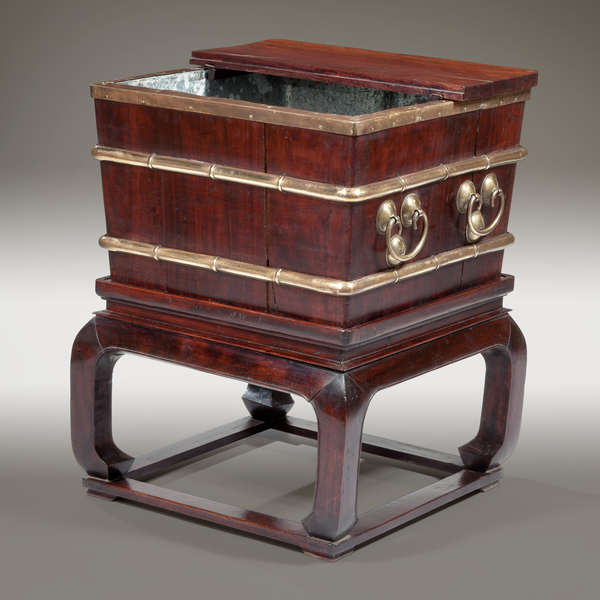 Export as PDF
> Send tear sheet to a friend or client

A tielimu ice chest, the two – part cover is made of two planks, the underside of each has two dovetailed transverse stretchers. One of these covers is cut with two ventilation holes in the form of a recessed circle with a cash motif. The sides of the chest are made of two planks butt joined to each other and held together by continuous brass straps secured to the planks by brass rings that are probably held in place as split pins hidden on the inside by the liner. Two sides have bail handles with domed circular back and striking-plates. The bottom of the chest is a standard tongue and grooved softwood, floating panel with a single transverse stretcher. The interior is lined in thick, soft pewter seamed in four across the base and up the sides and wrapped over the top edge now secured by a brass strip. There are signs of a hole for a plug later filled. The ice chest sits on a stand with C- shaped legs joined by a flat stretcher.

Ice chests, made in a number of materials including porcelain and cloisonné, are relatively rare and seemingly not represented in many modern day collections. Robert H. Ellsworth illustrates an example, then in his collection and now in a private collection in the Philippines, in ‘Chinese Furniture, Hardwood Examples of the Ming and Early Ch’ing Dynasties’, 1970, plate 147, page 231 where he ascribes it an early 17th century date. Another example from his collection in hongmu with a nanmu stand and slightly larger in size was sold at Sotheby’s New York, 18th March 2015, ‘The Collection of Robert Hatfield Ellsworth, Part II, Chinese Furniture, Scholar’s Objects and Chinese Paintings’ lot 189 ($137,000.00). Other examples are in the Palace Museum, Beijing (The Complete Collection of Treasures of the Palace Museum, Furniture of the Ming and Qing Dynasties, Vol. II, no.236, page 279, unusually in cypress wood), a lao huali example, originally the property of Sydney M. Cooper, illustrated by Gustav Ecke in ‘Chinese Domestic Furniture, 1992, plate 29, page 41 and another baimu (cypress wood) example from the collection of George Kates, illustrated in his ‘Chinese Household Furniture’, 1948, plate 105.

Another example was published by Nicholas Grindley ‘March 2009’ no.11, now in the collection of Minneapolis Institute of Art, Minnesota.