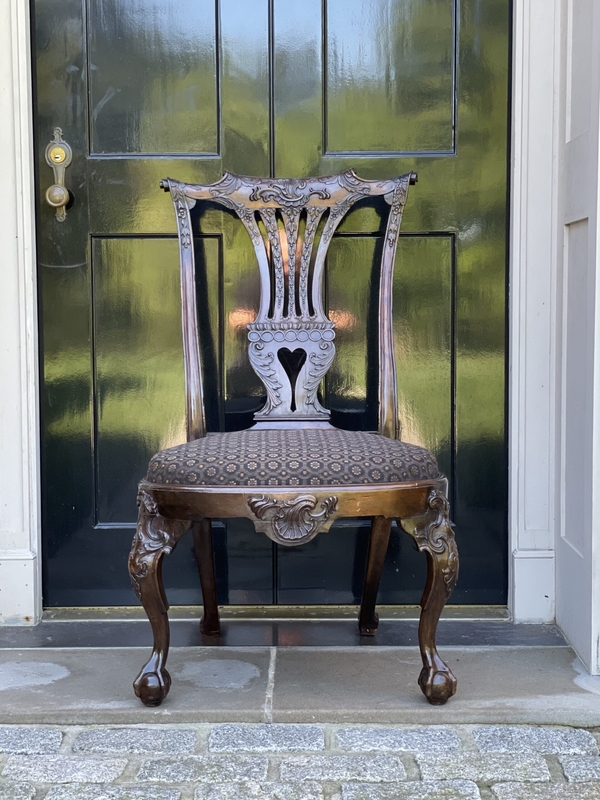 The profile and form of these chairs with their pierced splats and cabriole legs with claw-and-ball feet is clearly derived from contemporary English models, although its rococo-carved ornament is purely Continental in conception and execution. During the Hanoverian period there was obviously an interplay of design and craftsmanship between England and Germany as is shown by the close similarity between walnut bureau cabinets produced in London and Dresden in the 1730s (see Giseln Haase, Dresdener Möbel des 18. Jahrhunderts, Leipzig, 1986, figs. 72-84). A number of cabinetmakers in England are known to have had a thriving export trade with Europe. These included William Palmer (fl. 1730-1750) and John Phillips (fl. 1725-1762) whose trade cards were written in English, French and Dutch. In 1731 a fire at the premises of Giles Grendey (1693-1780) destroyed ‘an easy chair of such rich and curious workmanship…. it being intended, `tis said, to be purchased by a person of Quality who designed it as a present to a German Prince’ (see Beard and Gilbert, Dictionary of English Furniture Makers 1660-1840, Leeds, 1986, p. 371). Pattern books, such as Chippendale’s Director (1753), which was issued in French, entitled Guide du Tapissier, de L’Ebeniste, similarly influenced Continental cabinet makers. A copy of this work was originally in the Kunstbibliothek, Berlin, but was destroyed in the Second World War.